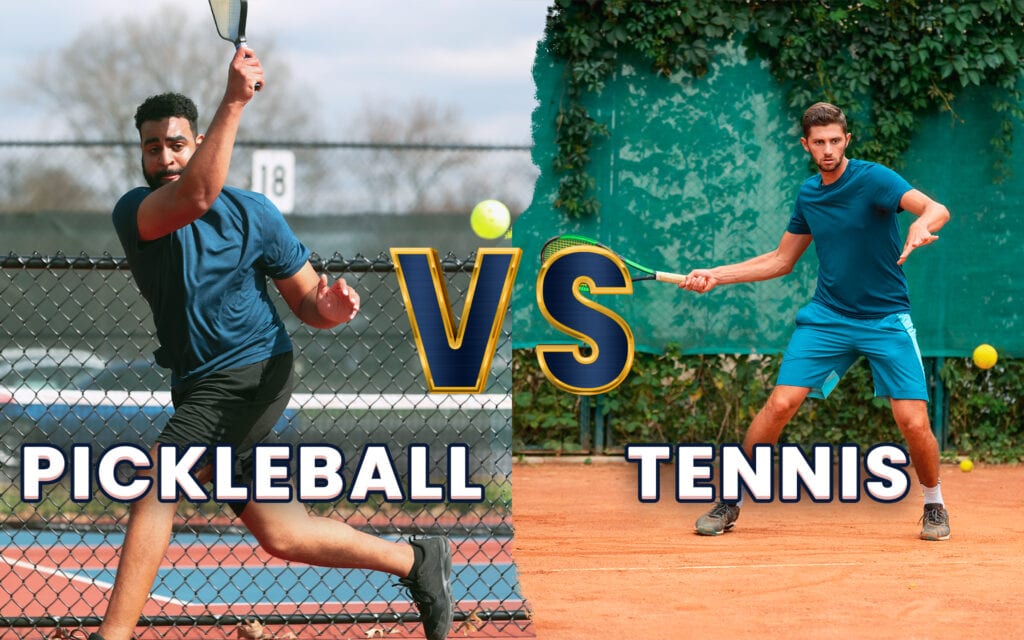 The number of racquet sports around are vast, and some of them are often compared with one another. Some people stand by tennis while others insist pickleball is better. But how are the two sports different in reality?

Today, we compare tennis vs. pickleball and explain the key differences between the two popular sports. Not sure which of the two is right for you to begin with? This article will help you out.

Everyone knows what equipment you use in tennis. You need two strong racquets that you can use with either one or both hands, along with a single tennis ball that bounces hard and fast.

Tennis racquets are big, heavy and have a cross-string pattern in the middle (usually 16 strings main and 19 across) that helps lower the overall weight as well as increasing bounce ability. A typical tennis racket weighs around 10.6 ounces (300 grams) while the length is usually around 27 inches (68.8 cm).

Pickleball paddles very much look like hybrids between a ping pong paddle and a tennis racket. It is smaller, lighter and has a solid head. The weight balance in a pickleball paddle is usually more towards the handle which results in less strain on your arm so beginners will find it more forgiving. A pickleball paddle typically weighs around 210 grams (7.5 ounces) and is around 41 cm (16 inches) long but there are outliers in both ends of the spectrum depending on skill level and preference.

There is a big difference in the balls used for both sports which directly affects how you play them and the pace of the games.

The tennis ball is a common sight for most people. The common tennis ball is fluorescent yellow and has a fibrous felt covering most of its surface. They're filled with air but under the surface is a holding layer of rubber compound. Official requirements dictate a tennis ball should have a diameter of 6.54 cm to 8.68 cm (2.57" to 2.7") and a weight of 56 g to 59.4 g (1.98 oz to 2.1 oz). Tennis balls bounce really well and with powerful rackets, travel speeds can easily exceed 100 MPH for pros.

Pickleball balls are usually made of a smooth molded material. They have 26-40 evenly spaced holes in them much like a floorball or Wiggle ball. They're usually fluorescent yellow as well, but they're a lot smaller than tennis balls. Official rules require a ball to have a diameter of 2.87" to 2.98" and weigh between 0.78 oz and 0.935 oz. Although they roughly have the same size as tennis balls, pickleball balls are about half the weight and their aerodynamic properties are a lot different due to their design. They do not bounce as much off the ground or paddle as tennis balls do and hence less speed is generated.

In tennis, you serve overhand or underhand, hitting the ball hard and fast to the other side of the court. You can alternate between these moves throughout the game, depending on your strategy, skill level and opponent.

With pickleball, you have to be a little gentler with your ball since it is much lighter and easier to hit. Instead, you serve it underhand, guiding it gently toward your opponent over the net. Once again, it shares a similarity with ping pong in that you cannot serve the ball overhand.

Additionally, serving the ball alternates between players in tennis every game. In pickleball, if you keep winning points, you keep serving - much like in badminton.

In pickleball, you use the full court size in both singles and doubles while the width of a tennis court is narrowed by two lines to 27 ft for singles.

Both sports use a net, and both the tennis and pickleball net measure 3 feet in height (roughly 91.4 cm).

Here's how the two courts look in comparison to one another:

Further reading: how to set up a pickleball court on a tennis court

Tennis and pickleball have similar rules for earning points: hit the ball back and forth until your opponent cannot get to it in time or someone hits it out of bounds.

That said, pickleball is a little kinder toward beginners than tennis. You can hit the pickleball back and forth pretty softly to get it across the court, whereas tennis requires a little more strength and coordination.

There are not a lot of differences between tennis and pickleball in this category. While there are subtle differences in their speed and physical requirements, you still need to remain conscious of your opponent's strengths and weaknesses.

Tennis has a much larger court with a fast-moving ball, so you may have to run often to reach the ball. With pickleball, you might not have to cover as much ground.

If you are looking for a little more cardio or stamina exercise, tennis might be a better fit. If you are perfectly comfortable standing at the net and moving your feet less than your paddle hand, pickleball is the winner.

Tennis vs. Pickleball - Which Sport is Right for You?

Both tennis and pickleball have their fans, though which sport is suitable for you depends on who you are as a player: how quick you are, how strong you are, and other such factors. In the end, the tennis vs. pickleball battle has no one true winner.

Tennis is a tough sport to master if you are used to playing racquet games with your wrist, such as badminton. If you prefer to play with a lighter object, such as a pickleball paddle, you might prefer that sport.

Both sports require some level of hand-eye coordination and quick reactivity to a variety of shots.

Tennis is a little kinder in that regard, since you have a larger space to play on, and a heavier ball that takes longer to cross toward you.

Pickleball has a much smaller court and a ball that can get to the end of the court faster. You will have to react fast not only to catch the ball with your paddle but also to react in a way that gets you a point.

In a way, that will also affect how fast the game goes by. If you prefer longer games that require a little more physical effort, tennis might be your sport.

By competitiveness, we mean whether you need to focus all your attention on the game, or whether you want to converse with your opponent during the game.

With tennis, you can technically have a conversation while you play. Although, you would have to call out your words, and you might tire out more easily by talking and running across the court.

Pickleball is a lot more casual by default, so you will not run out of breath as fast. Not to mention how the small court allows you to talk normally to the other player.

Pickleball might also be a good pick if you have played a lot of tennis, but just want something a little more casual to cool down with.

On a similar note, pickleball may be a better sport if you want to involve a large group of people, such as family or friends. You do not need a great skill set to play the game, and anyone can hop in and learn the game - even if you aren't all that athletic in the first place.

That said, pickleball is the fastest growing sport in the USA and the competitive scene is getting bigger every year. A lot of the pros we see in pickleball have some kind of background in tennis and saw an opportunity to excel in the new field that pickleball is so the transition may be ideal for some.

If you're up for the challenge, read this post to find out how to find pickleball courts near you.