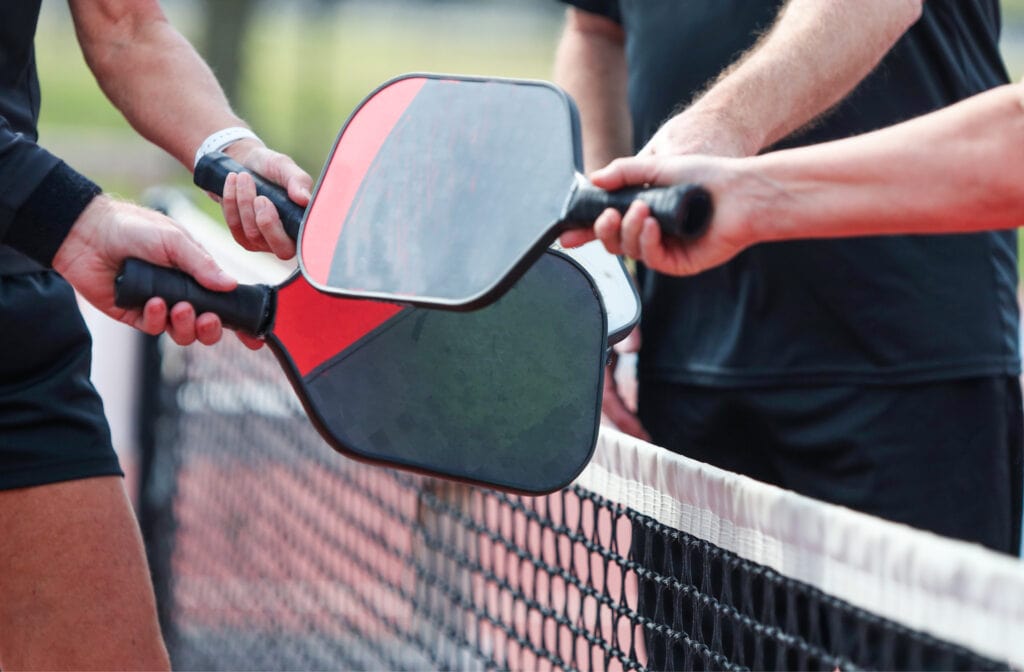 A Breakdown of the Pickleball Rating System

USAPA ratings define beginner, intermediate, and advanced players. It’s important to understand pickleball ratings because of the skills involved with each. Ratings ensure you’re matched with other players at your skill level. It also benefits you because you know what to work on to increase your pickleball levels.

Pickleball players with a 1.0 skill rating are new to the game. They have a general understanding of the rules but they don’t have any experience on the court. These players might not have any other sports background, either.

Being new to pickleball shouldn’t prevent you from playing. Though it takes effort to learn the rules and practice your skills, it’s a fun game that everyone can enjoy.

A player rated with a 1.5 skill level is slightly more advanced than a newbie. They can hit the ball back and forth but might miss some that come their way. These players are still learning to serve over the net to start rallying.

At this level, a player is learning more about the rules. They have a general understanding of scoring and how certain rules impact the way they play. They also understand the basic groundstrokes, even if they haven’t perfected them yet.

Pickleball players with a 2.0 rating are progressing in their skills. They can rally the ball for a short period before there’s a fault. As they play, they can use various strokes like forehand, backhand, and volley.

Players with this rank can serve the ball to get the game started. They know their position on the court and how it relates to other players. They know the rules of playing doubles, even if they haven’t yet.

By the time you have a 2.5 skill rating, you’re better at rallying the pickleball, even if you can’t do it very fast. You make almost every easy shot, though you might still struggle to cover the entire court.

A 2.5 rated player understands the rules and can keep score. They know what part of the court is the no-volley zone and what they can and can’t do in that area. The no-volley zone encompasses seven feet on each side of the net. Players can’t use this zone to return a ball unless it’s already bounced.

Players with 3.0 skill ratings can make good serves and return the balls quickly. They know all of the basic strokes and can use them when needed. They might still not have control over where the ball is going, but they can hit it.

At this level, players are learning new strokes like lobs and dinks. A lob is when the player hits the ball in a high arc so it goes to the back of their opponent’s court. When effectively used, this shot forces the opponent to move back from the net.

A dink is a gentle hit that launches the ball into the opponent’s no-volley zone. Because there’s less momentum behind this shot, it makes it hard for your opponent to return the ball.

While 3.0 rated players are learning and practicing lobs and dinks, they’re not going to be great at them. This is the ideal level to start learning different shots. When you’re able to mix up your game, you’ll also learn to understand the strategy in a new way.

Players with a 3.0 skill rating know the fundamentals of pickleball and are ready to play tournaments.

A person who’s rated at a 3.5 skill level is a decent pickleball player. They have more control over where the ball goes when they hit it.

These players can return medium-paced shots. They can return fast-paced shots too, but might not have as much control over the ball or will miss some shots.

At this rank, players have a strong grasp over the shots they’re learned so far, which means it’s time to learn new ones. The backhand is especially important to learn at this stage. Many players avoid it, but knowing how to backhand can empower you during gameplay.

Players at this level deliver good serves, even if they can’t control the depth yet. They can keep a consistent rally, volley easily and mix up the hits they use during the game. They also understand how to use the no-volley zone to their advantage.

In addition to predicting the opponent’s shots, these players are ready to learn the strategy behind doubles play. While the general rules are the same, you have to be aware of your partner. Knowing how to work with them will help you both play a good game.

Pickleball players with a 4.0 skill rating are close to mastering the game. Their shots are perfectly timed and controlled. They know many different shots, so they can vary their gameplay enough to force their opponents to make mistakes.

Practicing the spin will help throw off other players, and this is a great time to practice it. Though a shot will look smooth, it will spin out of control when it lands on the opponent’s side of the net. The spin can send it in another direction, making it nearly impossible to hit.

At this level, players know how to judge a dink and know if they should go after it or not. They can spot weaknesses in their opponents and understand how using certain skills can work in their favor.

They understand how these skills work with their doubles partner, so both players are at their best. Partners can now learn stacking, which is a way to keep one player in a certain area of the court instead of using traditional positions.

When you reach a 4.5 skill rating, you have the fundamentals of pickleball down pat. You know your position on the court and have mastered your footwork and the three basic shots. You’re able to use spin on certain hits to throw off your opponent.

Serves at this level are always consistent and controlled. You can spot your opponent’s weaknesses and adjust your skills accordingly. Mixing up your shots and strength of delivery help a lot at this stage because your opponent won’t know what’s coming next.

You work well with your partner at this level. You know where they’re going to be and how they’re going to hit, just as you know what to expect from the opponent. Instead of reacting to shots, you’re always one step ahead.

By the time you have a 5.0 skill rating, you’ve mastered all types of pickleball shots. You’re able to understand what’s coming your way before your opponent gets the ball over the net. You have total control over the strength and depth of your shots.

Knowing what your opponent is sending your way means you can minimize your errors while varying your approach to force errors from them. You can vary your play and use spins, so your opponent doesn’t know what’s next.

If you had an athletic inclination before starting pickleball, this is where your natural talent will elevate you as a player. Anyone who wasn’t a natural athlete can still reach this level and exceed it, but they will need more practice and dedication.

At this level, speed is key to advancing your game. Knowing how to move quickly on the court will result in better gameplay. Understanding how to transfer your weight will also increase your speed.

Players with pickleball levels of 5.5 and above are at the top of their game. They consistently win tournaments, always play exceptional games, and stay safe while doing so. Knowing pickleball rankings will ensure you get the best-matched player for your games.

If you’re familiar with pickleball, then you might already have an idea of where you rank on the USAPA ratings. Understanding the pickleball rating system not only tells you how skilled you are but also lets you know what to work on.

All athletes want to get better at their game, and pickleball players are no different. Once you find your rating, you can look at the levels above you and know how to improve your skills. In addition to practicing on the court and playing with others, you can study the game to improve your rank.