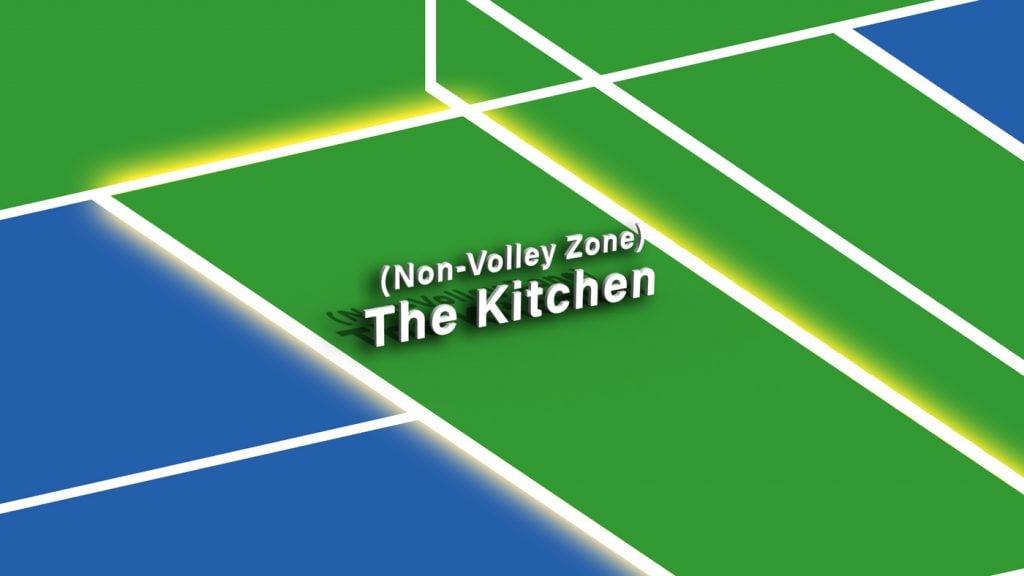 In pickleball, courts are divided up into three main parts. One of these parts is the non-volley zone, commonly referred to as the kitchen.
This area has its own set of pickleball kitchen rules, unique to the sport.

What is the Pickleball Kitchen?

​One main area of the pickleball court is the non-volley zone, which is the area between the net and the non-volley line (located 7 feet behind the net). This area is commonly referred to as the “kitchen”.

The pickleball kitchen has different rules than the rest of the court. In this area, a volley may not be hit. Volleying in this area will result in a fault.

A volley occurs when the player hits the pickleball out of the air, rather than waiting for it to bounce. Hitting a volley can increase the speed of the ball, and is useful for high balls that would require a good deal of backing up in order to let them bounce.

The opposite of a volley is a groundstroke or the act of hitting the ball after it has bounced. These shots often land deep into the court and are used to sustain long rallies and run the opponent.  Understanding these two pickleball terms is critical to understanding the rules of the kitchen.

There are quite a few rules in pickleball you need to know to enjoy the game properly. Part of that is related to the kitchen area.

The simplest rule of the kitchen is that it is a non-volley zone. Within its area, no balls can be hit out of the air. The ball must bounce before it is struck.

Volleys may only be hit past the non-volley line, between that line and the baseline of the court.

2. Over the line rules

Because of this, even after the ball has been struck, momentum from the volley and the follow-through of the pickleball racquet must not cause the player or racquet to cross the non-volley line.

Even once the ball is dead on your opponent’s side, the momentum from the volley must not take you into the non-volley zone.

When volleying near the non-volley line, your partner can actually hold you back to keep you from crossing over the line due to momentum.

However, even if you don’t cross the line, it will still be a fault if something you’re wearing does. For instance, if the player’s hat fell off and landed in the zone, a fault would be called.

4. When to enter the kitchen

The kitchen can be entered at any time, as long as a volley is not being hit. Groundstrokes may be hit from the kitchen.

If a player is moving out of the non-volley zone to hit a volley, both feet must be established outside the zone before the ball is struck from the air.

Why is it Called the Kitchen?

Pickleball is a combination of quite a few sports. While no one knows exactly where the term “kitchen” came from in relation to the non-volley zone, the general consensus is that it was borrowed from the game of shuffleboard.

In shuffleboard, the kitchen is the “10-off” area. If players land in this space, 10 points are deducted. Similarly, in pickleball, you do not want to land in the kitchen.

However, as explained by the rules above, while there are stipulations to being in the pickleball kitchen, it is forbidden if the rules are followed. Interestingly enough, tennis, though similar to pickleball, is the exact opposite in terms of the kitchen. Tennis players move to the net specifically to volley.

Regardless of how the name was coined, the rules of the kitchen are key to the game. Breaking them will result in a fault. Essentially, if you’re hitting, about to hit, or just hit a volley, stay out of the kitchen!