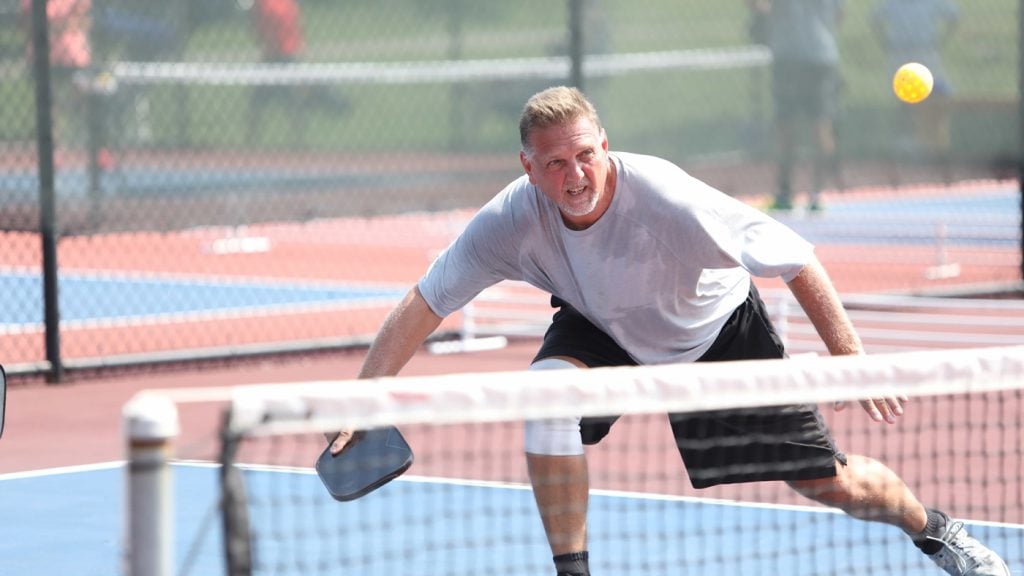 First and foremost, pickleball is generally played on a badminton-like court that has a net in the center. You’re able to play this game against one other person, or you can play in teams of two as doubles. The team or person who gets to serve first is decided upon by a good old fashion coin toss. When you’re serving the ball, you must do so diagonally with an underhand motion. Your feet must stay behind the back line, and the paddle must be kept below your waist.

For a serve to count, it has to make it clearly over the net and land in the other persons playing area. That person must then allow the ball to bounce at least once before they can return it back to you. The ball must bounce at least once every time it crosses the net. If you’re playing on a team, only the person the ball was served to can serve the ball back. If the other teammate serves the ball back, there will be a point added to the opposing team’s score.

If the ball ends up hitting the net, it is called a “let,” and the other team gets to serve the ball. There is no limit to how many times a let can occur in Pickleball. On the court, there is what’s called a non-volley zone. This is a 7-foot area on both sides of the net. No volleying is allowed in this area. It can be performed outside of this area.

There are several ways that your opponent can score points from you. This can happen if you don’t return the ball or if you hit the ball out of bounds. This can also occur if you volley the ball in the non-volley area on your side of the net. Both sides serve back and forth until you come to a score of 11 and there is at least a two-point lead. Whoever has this score is announced the winner. Let’s break down the game a bit more, so it’s easier to understand.

Scoring changes based on if you’re playing doubles or singles which we’ll talk about next. Scoring is much easier when playing singles and can confuse a lot of people the first time they play a doubles match. A unique thing about this game is that points are only scored when serving. If you’re serving and I’m on the opposing team, I can’t score.

When you get a point, you must rotate sides with your partner. But this is only if you get a point, you do not rotate when the other team scores. If you’ve seen a game played, you may have heard the score read out in a series of three numbers. This will be the server’s score, the receiving team’s score, and the serve count. A score will be read as something like 6-5-3, for example.

Can be played singles or doubles

Like you’ve read multiple times throughout this article, the game can be played with two or four people. Keep in mind that pickleball rules change quite a bit when you go from playing singles to doubles.

One of the most confusing things about this game is the double bounce rule. After each serve, the teams must make a groundstroke before volleying the ball. A double bounce is different from the ball bouncing twice. It is much easier to understand with the drawings and videos in the article linked!

We mentioned the no volley zone before. This is an area that both sides of the court have that is 7 feet long. This area is where, as you can tell by the name, you are not allowed to volley. This is put in place so that people don’t smash the ball down against their opponents. Volleying is allowed in pickleball, just not in those designated areas.

When it comes to line calls, the right way to do it can be complicated, but the rulebook makes it much more manageable. Each side of the court is responsible for calling their own lines, though there are rules set in place this can easily cause teams to get heated if called incorrectly.

There are plenty of faults when it comes to pickleball. They usually come from served balls but can vary quite easily. A fault could be a served ball touching a permanent object before it hits the court or it could be the ball hitting a member of the opposite side before it touches the ground. A fault could be from the ball hitting or landing outside the lines or if the wrong team member makes a serve. Study up on what counts as a fault before hitting the court!

Serving Initially and Throughout the Game

To begin the game, whoever serves first is based upon a simple coin toss. But if you’re playing doubles, who serves out of the two of you? This is easily figured out by allowing whoever is playing on the right side of the court to serve first. After the first serve, it switches off between the two players on each team.

Where Did Pickleball Come From?

The game Pickleball was created in 1965 on Bainbridge Island which is near Seattle in Washington. A few men by the names of Bill Bell, Barney McCallum, and Joel Pritchard invented the game to cure their children’s summer boredom. Over time, it has gained its popularity and even has its own national championship. It’s easy to learn, and several countries throughout the Americas and Europe are getting in on the fun!

Why is it Called “Pickleball”?

You’d think because of its name, there would be pickles involved somehow but there isn’t. There are several different versions of how the game got its name. Joan Pritchard, Joel’s wife says that she was the one who gave it its name because of the way it gets played reminded her of the pickle boat where oarsmen are taken from other boats and put into the pickle boat. While Barney, one of the creators said it was named after Joel’s dog Pickles. Pickles is said to have taken the ball while the children were playing and run around the yard with it. Other people claim it’s a bit of both and that the game didn’t actually have a name for the first couple of years it was around.

What Gear is Required?

Just like any sport, there is plenty of gear required in order to play. If you’re playing professionally, more specific gear is needed.

One of the main things you’ll need is a pickleball paddle. These paddles are a little smaller than a tennis racquet but bigger than a ping pong paddle. They are usually very light and are often made out of aluminum and graphite.

Along with a paddle, you’ll need a pickleball. You can use the ball outside or inside, depending on which model you have. They come in plenty of different colors and have holes in them similar to wiffle balls. Along with those two things, you’ll need a court with a net, tennis shoes and athleisure clothing.

Some people prefer having a dedicated pickleball bag to help them keeping their gear sorted properly when traveling. It is by no means a must to have, but more a nice to have that most players eventually invest in, when they’ve gotten into the sport properly.

Q: How is it different from tennis?

A: One of the biggest differences between the two sports is that in pickleball, you serve underhand. It’s also played on an entirely different court. Pickleballs have a lot less bounce than tennis balls. There is a no-volley zone, and there is no doubles alley in pickleball.

Q: How long does the average Pickleball game last?

Q: What type of workout do you get from playing Pickleball?

A: Pickleball is a full-body workout. Initially, it is cardio and will help to burn fat. You are working your arms, core, and legs while playing. A 160-pound adult can burn up to 250 calories from playing pickleball for just 30 minutes, and if the game is more intense, they could burn another 100 calories on top of that!