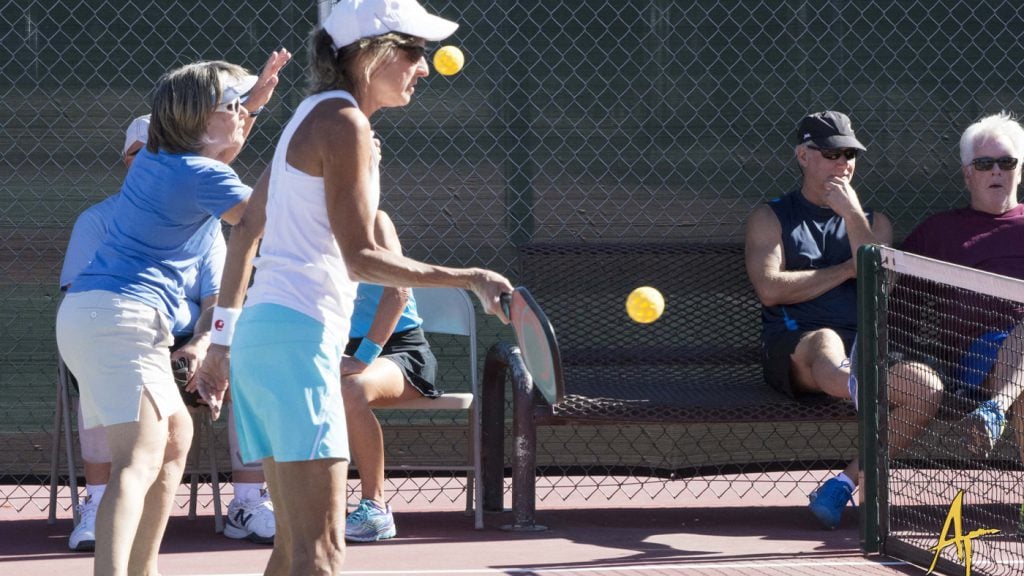 As with any sport, practice is critical to success. In this article, we’ll discuss the tools needed to become a successful pickleball player and how to practice those skills efficiently. You’ll get lots of inspiration to implement into your own training. The pickleball drills included below is bound to yield results, whether you’re a beginner or an advanced player, as they focus on core important aspects of the game.

The most important skills for pickleball players to develop are different strokes and a knowledge of when to use each. Pickleball players serve underhand, and with practice should be able to control speed and placement. The serve is something you can practice alone, and the only shot over which the player has complete control.

Depending on the abilities of the server, the return of serve can also be the perfect opportunity to attack. The returner may be able to end the point before it even starts.

Understanding basic groundstrokes is incredibly important. Players must be able to sustain long rallies of deep baseline shots. Moving the opponent around the court for an extended period of time can force them to make a mistake while tiring them out.

Dinks and drop shots are also important weapons. Unlike the groundstrokes, these shots land in the non-volley area where volleying out of the air is not allowed. Instead, the opponent must wait for the ball to bounce before returning it once again.

Another useful stroke is the volley, which is a return of the ball before it hits the ground. Approaching the net to hit the ball out of the air is both intimidating and increases the pace of play. It is a great way to take control of the point.

The last two types of shots are the lob and the overhead. A lob is essentially a shot that results in an overhead if the opponent is capable.

A lob is meant to fire the ball high, over the opponent’s head. An overhead is used to return a lob without running back and waiting for the ball to bounce. It uses the same motion as the serve and is a difficult feat of timing.

With the right drills and consistent practice, players can master each of these strokes and improve their game.

The most important skill to focus on as a beginner is maintaining a rally. This means keeping the ball in play back and forth over the pickleball net.

There are many pickleball drills for beginners that you can do alone to perfect your pickleball skills without needing a partner. One great practice drill is the “shadow swing,” which is the practice of swinging the pickleball paddle to perfect form, without hitting anything.

This will help you get used to the weight and size of the paddle, without the pressure of the ball flying towards you.

There are also drills to work on hand-eye coordination for beginners. The only equipment you need is a wall to hit against.

These wall pickleball drills help players become acclimated to the interaction between the paddle and the pickleball ball. Wall drills can develop consistency and reaction speed.

Once the basics have been mastered, players can try advanced pickleball drills and skills, which focus on additional skills such as spin, speed, and accurate placement.

PrimeTime Pickleball offers quality pickleball drills for advanced players on their YouTube channel. These drills are especially focused on developing a high level of control and reaction speed.

One of the drills in particular from this channel is the 2-touch drill, which develops critical ball control skills for advanced players.

Some pickleball drills for experienced players focus on consistency and control. For players who understand the basics, placing the ball exactly where you intended is important to winning points and making your opponent work harder.

A drill to help with this is the triangle dink drill, which focuses on hitting a dink to 3 different spots on the court sequentially. Practicing one pattern over and over and then switching it up will reinforce the player’s ability to hit the ball exactly where they intended to.

There are also drills that players can practice on their own without access to a hitting partner. A couple of those pickleball drills can be found below.

Alright, so now, you have no excuses for not having anything to practice. The next step starts with you. Go out and find a pickleball court near you, and enjoy the rewarding feeling of improving both your health (by burning some calories and getting in shape) and game.